Added 2 years ago by vindheim
71 Views
Today was an epic day in Norway. We went bobsledding in Lillehammer and then hiked Rampestreken in Andalsnes.
Instagram: http://www.instagram.com/brendanvanson --- The Drone I Use: http://amzn.to/2lXUzlR
Twitter: http://www.twitter.com/brendanvanson
Facebook: http://www.fb.com/thetravelwriter

It's time for another 4k Norway vlog. And, today's travel vlog was pretty packed with action. We left Oslo early in the morning and headed towards Lillehammer. The town of Lilliehammer was the host of the 1994 Winter Olympic Games and it is now still a bit of a tourist town. After exploring town a little bit, we headed to the bobsled track. And, for a bit of an adventure we did the bobsledding in Lilliehammer. The bobsledding was intense. We got up to g-forces over 3, and speeds of over 200 km/h. It was bumpy, and wild, and totally fun. I'd definitely like to go bobsledding again at some point.
After leaving Lilliehammer, we headed towards Andalsnes. On the way, we stopped at a really cool Norwegian Stave Church called Ringebu. And, yeah, apparently Ringebu is the actual name; despite my disbelief.
Late in the afternoon we arrived at Andalsnes which is this beautiful little town on the edge of a sharp fjord. The setting of the campground there is just unreal. It's one of the most beautiful places I've been in Norway.
Despite being extremely tired, a crew of us headed up for a hike above Andalsnes called Rampestreken. The trek takes you up near the peak of the mountain and to an insane viewing platform that reaches out into the valley. It's incredible. The hike up Rampestreken was a little bit more challenging than we expected, but we still made it up there in time for some epic light. It is incredible; even at midnight, there's still so much light and it is beautiful. The views from Rampestreken might among the most epic in Norway.
This Norway travel vlog ends there in Andalsnes.
Tomorrow, I'll be back at the 4k Norway vlogs with an episode cruising through the Troll's Pass which is supposed to be one of the most beautiful drives in the world. Stay tuned. 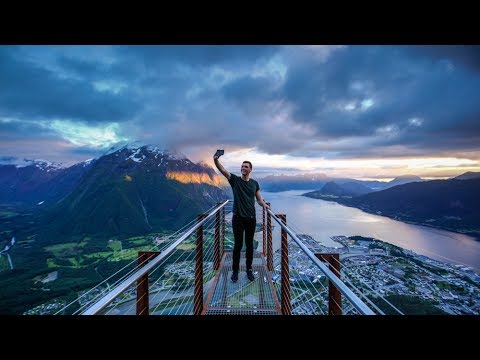 Today was an epic day in Norway. We went bobsledding in Lillehammer and then hiked Rampestreken in Andalsnes. Instagram: http://www.instagram.com/bren...