Added 1 day ago by vindheim
0 Views
Hello, this is Walk Around.

Thank you for watching the video. Your 'Subscription' and 'Like' help a lot to grow this channel :)

The Palisades Interstate Parkway (PIP) is a 38.25 mile-long (61.56 km) limited-access highway in the U.S. states of New Jersey and New York. The parkway is a major commuter route into New York City from Rockland and Orange counties in New York and Bergen County in New Jersey. The southern terminus of the route is at the George Washington Bridge in Fort Lee, New Jersey, where it connects to Interstate 95 (I-95), Route 4 and US 46. Its northern terminus is at a traffic circle in Fort Montgomery, New York, where the PIP meets US 9W and US 202 at the Bear Mountain Bridge. At exit 18, the PIP forms a concurrency with US 6 for the remaining duration of its run.

The route is named for the New Jersey Palisades, a line of cliffs rising along the western side of the Hudson River. The PIP is designated, but not signed as Route 445 in New Jersey and New York State Route 987C (NY 987C), an unsigned reference route, in New York. As with most parkways in the New York metropolitan area, commercial traffic is prohibited from using the PIP. The Palisades Interstate Parkway was built from 1947–1958, and fully opened to traffic on August 28, 1958.

New York, The parkway enters Rockland County in the hamlet of Palisades. At about the border the PIP changes direction from due north along the Hudson River to a north-west direction. Shortly after the Kings Ferry Service Area in the center median, the first two exits in New York are key exits for two colleges in Rockland County. Exit 5 provides a link to St. Thomas Aquinas College, and exit 6 provides a link to Dominican College. In West Nyack, the PIP has a key interchange with the New York State Thruway (I-87 and I-287). This intersection is about seven miles (11 km) west of the Tappan Zee Bridge. After the PIP's interchange with the NY Thruway, the PIP turns slightly north-east. At exit 13, the PIP intersects US 202 as the route crosses south of Harriman State Park in Mount Ivy. This is the first of two meetings between the PIP and US 202. At exit 15, the PIP has its last busy intersection in Rockland County with County Route 106 (CR 106, formerly part of NY 210) in Stony Point. From here, the PIP enters Harriman State Park, and at exit 16, the PIP intersects Lake Welch Parkway, which is one of several parkways commissioned within the park.

The parkway enters Orange County north of Lake Welch Parkway at exit 16 and south of the Palisades Interstate Park Commission Visitor Center, located in the center median in what was originally a parkway service area. The first interchange in Orange County is exit 17 at Anthony Wayne Recreation Area. At exit 18, the PIP intersects US 6 and Seven Lakes Drive. US 6 west heads toward the Thruway and NY 17 five miles (8 km) west in Harriman. US 6 east forms the PIP's only concurrency for the last two miles (3 km) of the PIP's run. Seven Lakes Drive joins the two routes for one mile (1.6 km) before departing at exit 19. The two routes then enter Bear Mountain State Park in an eastern direction. Finally, the Palisades Interstate Parkway meets its end at US 9W and US 202 at a traffic circle inches from the Hudson River and the Bear Mountain Bridge. US 6 and US 202 head east over the bridge, while US 9W heads north toward the United States Military Academy in West Point.[10] (Southbound US 9W, breaking off to the right, is the same road as westbound US 202.)

Hope you find our videos a good experience and support us by hitting the like button, commenting below, and subscribing, it means a lot to us and helps the youtube algorithm to spread them more.

Thank you, Everyone! See you in the next video! 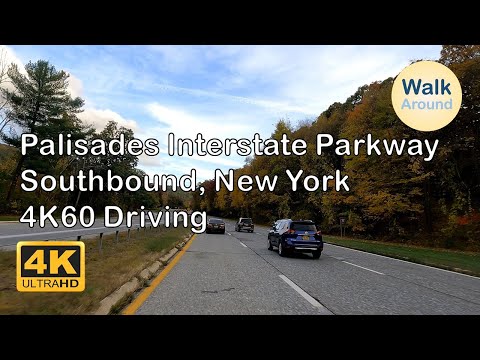 Hello, this is Walk Around. Thank you for watching the video. Your 'Subscription' and 'Like' help a lot to grow this channel :) Today, I will drive Pa...